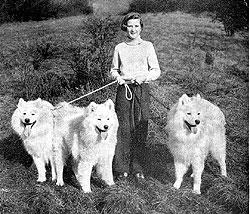 The name Samoyed derives from the Samoyed Tribes in Northern Russia and Siberia. In Southern parts of the area they used white, black and brown parti-coloured dogs as reindeer herders; in the northern parts the dogs were pure white, had a mild temperament and were used as hunting-and sledge dogs. The Samoyed dogs lived close to their owners, they even slept within the shelters and were used as heaters. The British zoologist Ernest Kilburn Scott spent three months among Samoyed Tribes in 1889. Returning to England he brought with him a brown male puppy called "Sabarka". Later he imported a cream coloured bitch called "Whitey Petchora" from the western side of the Urals and a snow white male called "Musti" from Siberia. These few dogs and those brought by the explorers are the base for the western Samoyed. The first standard was written in England in 1909.

Medium in size, elegant, a white Artic Spitz. In appearance gives the impression of power, endurance, charm, supplenes, dignity and self-confidence. The expression, the so called "Samoyed Smile", is made up of a combination of eye shape and position and the slightly curved up corners of the mouth. The sex should be clearly stamped.

Viewed from the front and in profile only slightly convex. Broadest between the ears. Slightly visible furrow between the eyes.

Clearly defined but not too prominent.

Well developed , preferably black. During some periods of the year the pigment of the nose can fade to a so called "winter nose"; there must however be dark pigment at the edges of the nose.

Strong and deep, approximately as long as the skull, gradually tapering towards the nose, neither snipey nor heavy and square. The bridge of the nose is straight.

Close fitting black and rather full. The corners of the mouth are slightly curved forming the characteristic "Samoyed Smile".

Regular and complete scissor bite. The teeth and the jaws are strong. Normal dentition.

Dark brown in colour, well-set in the sockets, placed rather apart, somewhat slanting and almond-shaped. The expression is "smilling", kind , alert and intelligent. The eyerims are black.

Erect, rather small, thick, triangular and slightly rounded at the tips. They should be mobile, set high; due to the broad skull well apart.

Strong and of medium length with a proud carriage.

Slightly longer than the height at the withers, deep and compact but supple.

Of medium length, muscular and straight; in females slightly longer than in males.

Broad, deep and long, reaching almost to the elbows. The ribs are well sprung.

Set rather high. When the dog is alert and in motion the tail is carried bent from the root forward over the back or side, but may be hanging at rest, then reaching to the hocks.

Well placed and muscular with strong bones. Viewed from the front straight and parallel.

Oblique and close to the body. Approximately as long as the shoulder.

CLose to the body.

Viewed from behind straight and parallel with every strong muscles.

OF medium length, rather broad and muscular.

Rather low and well angulated.

As front feet. The dewclaws shold be removed. 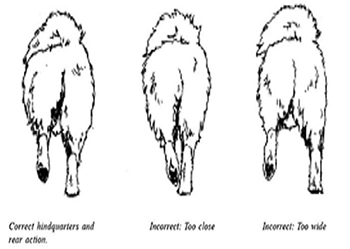 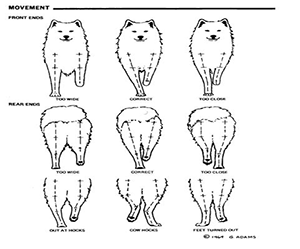 Powerful, free and tireless in appearance with long stride. Good reach in the forequarters and good driving power in the hindquarters. 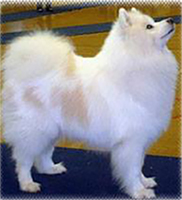 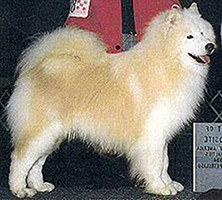 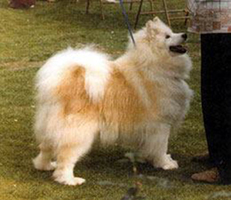 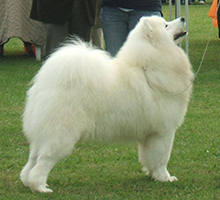 Profuse, thick, flexible and dense polar coat. The Samoyed is a double coated dog with short, soft and dense undercoat and longer, more harsh and straight outer coat. The coat should form a ruff around the neck and shoulders framing the head, especially in males. On head and on front of legs, hair is short and smooth; on outside of ears short, standing off and smooth. Inside the ears should be well furred. On back of the thighs the hair forms trousers. There should be protective growth of hair between the toes. The tail should be profusely covered with hair. The coat of the female is often shorter and softer in texture than that of the mail. The correct coat texture should always have a special glistening sheen.

Pure white, cream, or white biscuit. (THe basic colour to be white with a few biscuite markings.) Should never give the impression of being pale brown.

Any departure from the foregoing points should be considered a fault and the seriousness with which the fault should be regarded should be exact proportion to its degree. Visible faults in structure.
Light bone.
Males not masculine and females not feminine.
Pincer bite.
Yellow eyes.
Soft ears.
Barrel ribcage.
Double twisted tail.
Low on the legs.
Badly bow-legged or cow hocked.
Wavy or short coated throughout, long, soft or coat hanging down.
Aloofness.

Coat colour other than permitted in the standard.

Male animals should have two apparently normal testicles fully descended into the scrotum.